This bi-weekly report describes the updates and challenges related to the government’s relief response program, known as Dastarkhan-e-Meli, and health assistance in combating Covid-19 in Afghanistan.

Time Coverage: The report covers all the measures undertaken from March 01 to March 15, 2021, by the government in Afghanistan concerning health and humanitarian assistance during the Covid-19 pandemic. 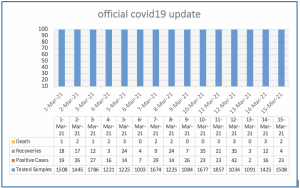 Following the Dastarkhan-e-Melli program, the reports confirmed serious mismanagement and lack of transparency in aid distribution to the needy families in Bamiyan province. According to CSHRN’s focal point in Bamiyan, the internally displaced people from Lal-Sarjangal and Yakawlang districts to the central province have been denied to receive aid packages. In addition, those families who took refuge in Bamiyan following the ongoing armed conflict in the neighboring Wardak province, have also been denied to receive humanitarian assistance under the Dastarkahn-e-Melli. Dozens of those displaced people referred to the provincial office of CSHRN in Bamiyan and shared their grievances. They also faced mistreatment by the provincial authorities in Bamiyan while asking for aid assistance. CSHRN’s focal point in the province has shared the problems with the authorities in Bamiyan, however, no satisfactory response was provided.