This bi-weekly report describes the updates and challenges related to the government’s relief response program, known as Dastarkhan-e-Meli, and health assistance in combating Covid-19 in Afghanistan.

Time Coverage: The report covers all the measures undertaken from April 1, 2021 to April 15, 2021, by the government in Afghanistan concerning health and humanitarian assistance during the Covid-19 pandemic. 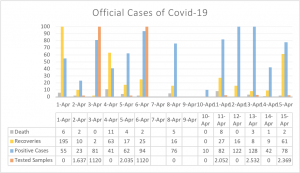 During the reporting period, security threats have been considered a key challenge to implement Dastarkhan-e-Melli program. The provinces such as Ghor, Logar, Jowzjan, Laghman, Paktia, and Helmand are identified with high risks posed by the Taliban.

As per CHRN’s previous concern over the exclusion of displaced people from the neithboring Maidan Wardak province to Bamiyan, during this reporting period, around 200 displaced families from Wardak province, now based in Bamiyan, have received food packages. However, concerns over bad quality of food items and mismanagement are still in place. For example, bean and soap have been removed from the distribution list.

Dastarkhane Melli program is in progress in the district of Lal-sarjangal, in which 125 development councils have newly received funds from the government. However, the program is suspended in the two districts of Tolak and Shahrak due to continued threats by the Taliban.

In these provinces, Dastarkhan-e-Melli is partly suspended due to lack of budget with the hope to resume the program once fund is transferred.