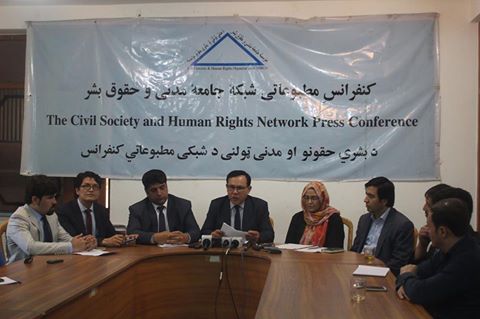 In the Name of Almighty Allah

Call for Afghan organizations and civil society activists the political representatives of the United Nations, the Government of National Unity and the enlighting movement  On the negotiations to get a fair solution

Given the troubles due to new developments in security and foreign policy, national unity government based on regional cooperation, in particular to strengthen relations with countries like India, which circles the pro-Taliban and terrorist groups in the region are considered as a threat and serious abstraction. Enemies of Afghanistan will not hesitate in the creation of any disaster and damage to the system and the people of Afghanistan.

With the expectation of a successful transition of this situation, to safeguard the stability of the system and prevent another humanitarian catastrophe, that might be sacrifice of military and civilians seeking justice, hence requires the leadership of the national unity government and the enlighting movement, by more farseeing and restraint, to enter a new phase of negotiations and their concepts, to reach a fair solution.
On the basis of Afghan institutions and civil society activists, to prevent another human catastrophe and to the formation of a new phase of dialogue and understanding among the conventional National Unity Government and the enlighting movement, the present calls to discuss with the following provisions:
1- Organizations and Afghan civil society activists, suggest that the government and the Supreme Council of the popular movement, the enlighting movement, will discuss their creation of a transparent mechanism for negotiations, enunciated the honor and the process of direct negotiations, mediated by the representative of United Nations in Afghanistan and the regulatory community of Civil society organizations to be accepted;

2- Afghan organizations and civil society activists, the political representatives of the United Nations in Afghanistan, requests  given its essential role in maintaining peace and to restrain from another human tragedy, conciliation and negotiations between the parties to assume their facilitation;

Hoping to prosperous and peaceful Afghanistan

2014 ANNI Report on the Performance and Establishment of National Human Rights Institutions in AsiaFebruary 16, 2015 1:47 pm