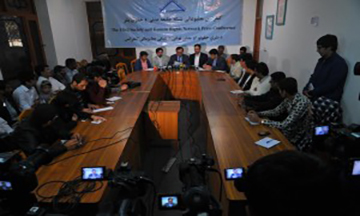 In the name of Almighty Allah

Peace talks with armed groups involved in the Afghan system is an integral part of official policy of Afghanistan since more than a decade. Despite the persistent efforts and high political and economic investments, conflict continues in Afghanistan and every year more other layers are added.

Due to the inefficiency and failure of the Afghan government’s peace policy in the three and a half decades, still the parties to the conflict do not respect the demands and sacrifices of people and recommendations of civil society and human rights organizations for current structural transition from conflict.

It has been more than a decade since Afghan peace talks with Taliban continues; but not only Peace was not in amid, but even we have not witnessed durable ceasefire and cessation of the conflict.

Despair, frustration and cynicism of the citizens of Afghanistan to the official policy of peace and reconciliation of the warring groups becomes more and more widespread each day.

Recently, two important and promising issue about the Afghan government and the International Criminal Court, in connection with the logical and legal termination of Afghanistan conflicts have been proposed. Last week, Afghan President in a meeting with the delegation of the United Nations, demanded to include the name of the leader of the Taliban and other terrorist in the black list of the United Nations. The request can be considered as a turning point, in a serious struggle with terrorist groups, which is a major cause of human rights violations and humanitarian law in conflicts in Afghanistan.

On other hand, prosecutor’s office of International Criminal Court (ICC), in its recent preliminary report has informed about preparation of this office for extending Afghanistan’s judicial investigation process. To begin this process, prosecutor’s office require permit from the presiding judges of the court.

Fortunately, Afghan National Security Council expressed its interest to cooperate with the international criminal court based on the policy of that court and other humanitarian documents.

This is not the first time where Afghanistan government has taken an official position in ensuring justice. For example: the joint efforts by the United Nations, the Afghan government and the Afghan Independent Human Rights Commission, which finally in 1384 presented the plan for “Peace, Reconciliation and Justice”, which is one of the best action for securing peace and justice. But, in parallel with these efforts, the other measures to deadlock the follow-up of crimes on the citizens of Afghanistan have also continued to pursue crimes with more intensity. For instance: Approval of the “National Reconciliation, General Amnesty and National Stability” law can be mentioned, in which human rights violators are given exemption from prosecution.

After approval of the “National Reconciliation, General Amnesty and National Stability” law and government’s inability to follow up with the crimes in Afghanistan practically deadlocked and stopped the issue of securing justice and investigation on violations of human rights.

The Afghan government, with signing this Agreement, where the slightest reference to the rights of victims and securing justice is not given, once again made citizens hopeless to achieve justice and lasting peace.

The content of the Peace Agreement of National Unity Government and Mr. Hekmatyar’s Hezb-e-Islami clearly shows that not only the demands and needs of the victim of three and a half decades of conflict has been ignored but also the least attention has not been given to the Afghan constitution, international obligations and view of citizens.

Article five to the twenty-one of total twenty-five-point agreement included the commitments where the national unity government is clearly obligated to provide the judiciary immunity, land distribution, the cost of accommodation and living for the leaders of the Hezb-e-Islami in Afghanistan.

Judicial immunity without condition even in the “National Reconciliation, General Amnesty and National Stability” which is also conditional, shows that the national unity government included the issue of “what is due to man” in the favor of immunity of Mr. Hekmatyar’s Hezb-i Islami leaders.

In our opinion, facilitation, acquisition and the obligation to pay Hezb-e-Islami leader’s living cost, residence and ensuring safety and exempting members of the party’s which are mentioned in the Agreement Peace, specifies not only obvious disregard of the provisions of the constitution, international obligations and protection of the fundamental rights of citizens but also signing of this agreement is a license to continue systematic violations of human rights in Afghanistan.

Experience shows that given the demands of the victims, recognizing the roots and causes of violence, respect for the views of citizens, justice and developing non-repetition mechanism guarantees the structural transition from conflict to peace. Therefore, civil society institutions and human rights activists in Afghanistan once again to secure justice and lasting peace, propose the following suggestions to the Afghan government, Afghanistan’s international partners and the United Nations:

With the hope for peaceful and non-violent Afghanistan!