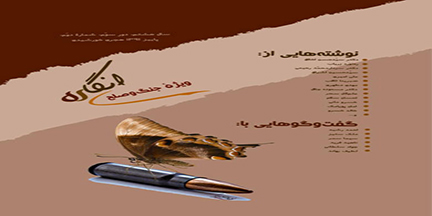 The secretariat of the Civil Society & Human Rights Network of Afghanistan (CSHRN) is pleased to announce that the new volume of «Angaara» magazine has been published. Peace and respect to social security constitute one of the important strategic components of CSHRN. According to CSHRN, peace is a proper and fair way for securing, promoting and defending the Human Rights values,

democracy and the rule of law. Meanwhile, peace cannot be separated or kept away from the social justice. CSHRN considered the securement of Human Rights as one the most crucial and significant backgrounds for generalizing peace in Afghanistan. Respecting the women’s rights constitutes one these values. Hence, Angaara has initiated peace discourses as the most obvious social demands of Afghans in its new version.

The new version of «Angaara» has been dedicated to peace and its challenges in Afghanistan as well as its role on the international security. The working group of «Angaara» magazine has tried their best to professionally discuss the factors of the continues wars and conflicts from various angles as political, juridical and sociological point of views. The aim of publishing the dedicated version, is advocating for peace and stability in the country. In this volume, the national and international writers, analysts and researchers have expressed their ideas and topics regarding peace, that have been discussed slightly by other institutions and media in the country. Rahnaward Zaryab, a famous Afghan writer has provided a very precious article about the values of peace in the Persian Literature. In this issue, a commendable interview was done with Mr. Ahmad Rasheed, a well known Pakistani journalist and analyst, regarding the peace situation in the region and the role of its players. Dr. Sima Samar, head of the Afghan Independent Human Rights Commission (AIHC) and one of Human Rights defender and fighters, had an interesting interview regarding peace, based on Human Rights values with Ms. Frozan Darwish, which is very informative and readable.

Mr. Malek Sitez, a well known researcher of international affairs, has expressed his informative and important opinions of the newly formed states, regarding peace based on justice and its coordinating ways with the current situation of Afghanistan, through an interesting interview with Mr. Fahim Rasa. In this volume of Angara , Mr. Sayed Hussein Ashraaq, a famous writer and researcher has provided his academic article about the civil disobedience. Sabrina Saqeb, one of the active figures in promoting the rights of women, has also discussed peace from the social point of view in this volume. We have many other articles from respected and honorable authors as; «peace from the view point of the modern philosophy» from Dr. Sayed Hussein Akhlaq, necessity of war from Mehdi Mutahari, war & peace from Ali Amiri, Peace and its practical framework in Afghanistan from Dr. Sardar Mohammad Rahimi, «the future of unstable peace & permanent threat of war» from Khalid Khisraw, «the plot of peace» from Dr. Masooda Jalal, «peace affected from discrimination» from Ismail Darman, «No return» from Musadiq Parsa, «War, a subject to ponder» an interview with Jawad Sultani, «Peace, sacrificed of political games» an interview with Nahid Farid, a Member of Parliament and many other articles have been published.

We are grateful of all analysts, researcher and dear writers, who assisted us in this version of Angaara magazine, and hope to take great use of other intellectuals and writers in the future. Meanwhile, libraries and academic, research and scientific centers are being requested in order to promote the peace discourses and talks in the country, get the most out of this version of Angaara. We ask the civil institutions, Human Rights activists, women rights defenders and advocates of peace and security, to use this volume of «Angaara» magazine in their promotional and educational programs.

We want Angaara’s fans and interested once to help CSHRN in distribution of this magazine and generalization of its contents. In order to improve the programs of Angaara, the publication and information section of CSHRN would like the readers of Angara magazine to provide their ideas and feedbacks and by this way help and collaborate with the secretariat of CSHRN particularly the managing section of Angaara magazine.

Expecting the securement of peace, justice
and security in the country!