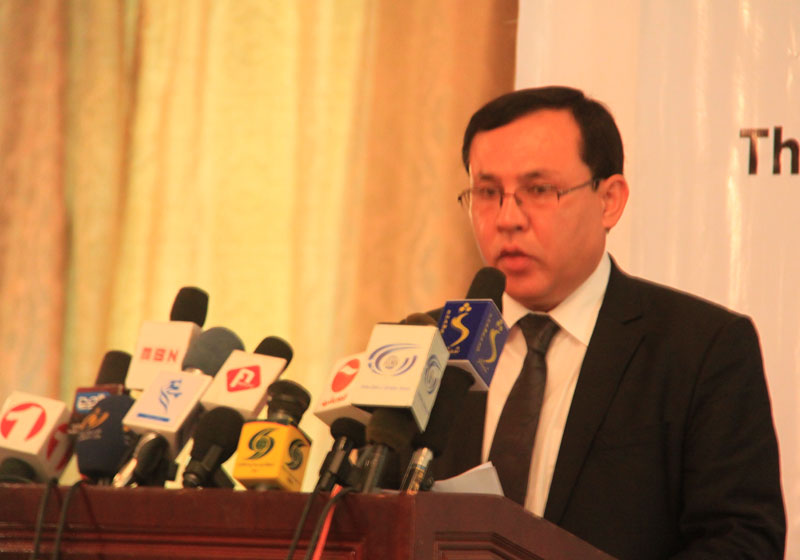 At the beginning, the Chairwoman of CSHRN’s Board, Ms. Selay Ghafar welcomed all the participants of the General Assembly. Ms. Ghafar reported the General Assembly on the role and activities of the Board during the past two years. Ms. Ghafar appreciated the collaborative relations of the member organizations in promotion of human rights and strengthening of civil society in Afghanistan. According to her, CSHNR is the main human rights network that actively promotes human rights values in Afghanistan. According to Ms. Ghafar during the past two years the Board productively communicated with the member organizations and CSHRN executive structures. It was a good experience for joint and team-working manners. On behalf of CSHRN member organizations, Ms. Ghafar has appreciated the professional and constructive partnership of the Danish Institute for Human Rights (DIHR) with CSHRN programs in Afghanistan. She also appreciated the productive and supportive role of Danish and Swiss government’s representatives in Afghanistan.

During the recent General Assembly, CSHRN’s report was presented by Mr. Naim Nazari, the Executive Coordinator of CSHRN. The report covered the two years activities of CSHRN 2011 -2012. The report elaborated the CSHRN activities in the field of strategic development of CSHRN during the past two years. The report mainly focused on main key result areas as capacity building, advocacy, monitoring, awareness rising and coordination. The report also elaborated the challenges and obstacles of the civil society and human rights situation in Afghanistan. At the end of the report, the executive secretariat presented the way of tackling the challenges based on the CSHRN program activities. Following Mr. Nazari’s presentation, the regional coordinators of CSHRN, Ms. Aziza Khairandish, CSHRN Coordinator from the Western region, Mr. Dr. Niamat Hamdard CSHRN Coordinator from the Eastern region, Mr. Ismail Zaki CSHRN Coordinator of central region, Mr. Manucher CSHRN’s Coordinator of the North and Northeast region and Mr. Bostan Walizai, coordinator for the southern region, presented their reports from regional activities of CSHRN in the remote areas. The reports of the regional coordinators were mainly focused on strengths and challenges of CSHRN activities in the region.

The second part of the General Assembly was dedicated for updating and approving the amendments of the CSHRN’s strategy. The program officer of CSHRN, Mr. Ahmad Seyar Lalee stated the main changes of strategies that were conducted during the strategic seminars in Nov-Dec 2012. According to Mr. Lalee a gathering of member organizations was organized to update the strategies of the network based on developments of CSHRN role in Afghanistan from Nov-Dec 2012. During the General Assembly the representatives of member organizations broadly discussed the new changes in strategy of CSHRN. Through the majority of votes, the General Assembly approved the changes and adopted the strategy of the network.

The General Assembly elected the following colleagues as members of the statement committee:

After electing the members of the statement committee, the General Assembly has elected the following colleagues for the evaluation committee of the network:

• The executive secretariat will organize its activities based on the updated strategy of the network approved by the General Assembly.

• The executive secretariat of the network, coordinate CSHRN activities with all member organizations in Kabul and 26 provinces of Afghanistan.

• The executive secretariat facilitates all activities of different democratic structures of CSHRN.

• To respect transparency and accountability the executive secretariat reports to the Board of the network systematically.

Press Release by the Civil Society and Human Rights Network (CSHRN) on Recent Crises in the Country.

Afghanistan: Joint call for an immediate end to attacks against human rights defenders and need for protection and accountability