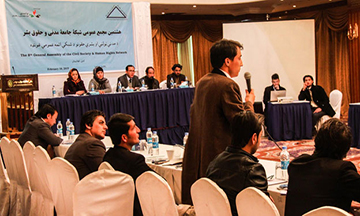 The 8th general assembly of the Civil Society & Human Rights Network (CSHRN) was conducted by the presence of its member organizations in Kabul on 10th Feb, 2015.

General Assembly is the highest decision-making authority of CSHRN that is organized once every two years, in which the member organizations are deciding and planning about the strategic issues of the network as well as electing the triple committee’s members via a democratic election.

At the beginning of the program, M.Naim Nazari, the executive director of CSHRN talked about the achievements of the network and praised the constructive coordination and cooperation of its member institutions. He asked the member organizations to make more and more efforts for monitoring the human rights situation and joint advocacy for improving the human rights situation in the country.

Mr. Nazari added that, the Civil Society & Human Rights Network with the assistance of its member institutions was able to publish nine educational manuals on human rights during 2014. He also mentioned some important and valuable reports that have been prepared and submitted to its relevant agencies by CSHRN during 2014. He concluded that these crucial reports are the Universal Periodic Review (UPR), the annual report on human rights situation in Afghanistan and Monitoring report on the functions of the Independent Human Rights Commission of Afghanistan to ICC.

The executive director of CSHRN has also mentioned the functions and activities of CSHRN in the field of coordination, capacity-building, monitoring the human rights situation, advocacy and public awareness.

Mr. Lalee has further talked on TAWANMANDI’s program, the program on establishing the defending mechanisms of human rights defenders and CSHRN’s new program for 2015-2017. He stated that for designing these programs, the member organizations have been consulted and exchange of ideas are currently in progress.

The general assembly has approved the amendments in the strategy and program of the Civil Society and Human Rights Network and announced its cooperation in this regard.

Electing the members of the triple committee

Mr. Mohammad Younus Akhtar from Irtebat Organization, Ms. Liah Jawad, from Foundation of Solidarity for Justice (FSFJ), Ms. Mina Khashie, from Green WishFoundation, Mr. Zahir Mahboob, the head of Green Foundation and managing director of Sabz weekly, and Ms. Malika Sadat from Nawaye Nai Banowan foundation have been elected for the board of CSHRN.

Access to information is a strategic priority for CSHRN